Mario will be tuned in from Spain this evening. And of course we have our usual mixture of wonderful music and interesting musings. We have lots of updates including additional information relating to the famous Writer who once lived at Dooneen. We now share a selection of images of Mario on the Sunday 30th July when he visited Millstreet. Happy Viewing and Happy Listening! Cork on 15 May. Cork in the week leading up to the event. To mark this historic 23rd anniversary of the most memorable Eurovision Song Contest in Millstreet on Sat.

We are also so very grateful to Ken D. Brennan for presenting three most important Folders of the minutes and notes referring to the preparation for the spectacular event in Millstreet which began at 8pm on the night introduced by Fionnuala Sweeney and of course won by Niamh Kavanagh. Do enjoy this brief visit down memory lane! And we continue with some more superbly colourful windows…. Ansgar who is involved in Media Management in Germany especially praised the fact that some 23 years since the amazing event we have still preserved many reminders of the historic occasion.

We thank Ansgar for honouring us with his visit. Michael has featured in many famous films through his phenomenal knowledge of all kinds of vintage transport. Many historic items from his Museum have been used in highly regarded films. His dedication to the preservation of vintage transport especially the railway world is totally inspiring. In the s he visited Millstreet when as we so clearly recall a traction engine was welcomed into Millstreet by Millstreet Pipe Band in a fundraising project for the preservation of the world of Steam.

It travelled slowly from Fenit to Mallow as far as we recall. If you are a fan of Eurovision then this will be very sad news. Anita Notaro was the tour de force responsible for directing the Eurovision Song Contest in from Millstreet in Ireland. Cork on May 15 to an international audience of over million people. The time is not free, it is the slave of a mythical end.

Visitors move through the exhibition as one might trace the contours of a giant ampersand - clockwise through the inner rooms of the "Part 1: Of course, the predominance of the timeline marked along the walls belies the complexity of the multiple, overlapping chronologies that actually come to structure the entire historical exhibit. All minutes are not created equal in the museum's "September 11, " narrative. Privileged moments from the day 8: But in addition to being expanded and compressed, the overall "timeline" gets broken when, after the "Events of the Day" section ends at The sudden rupture in the museum's overall layout from "during" to "before" to "after" demands close attention because it breaks with an otherwise dominant impulse to re-enact events in sequence.

Part 1 of the timeline evinces a distinct desire for verisimilitude, for viewers who weren't there on September 11, to experience the day as it was albeit, compressed to an experience of 45 minutes - the suggested "average" time it takes to meander through the exhibit. By narratively situating as both a result of and its belated apotheosis, the museum discursively puts visitors in the position of "knowing," of thinking of as what Frank Kermode calls "a mythical end.


In contrast, "the Bombing" room seems comparatively dislocated from the historical exhibit's more customary teleology, and, even more glaringly, the first room bears almost no causal relationship to the attack narrative, save for the vague manner in which it identifies the towers as "landmarks" and, therefore, prominent targets. Significantly, the transition into Part 2 feels particularly jarring due to the radical shift in the museum's otherwise uniform aesthetic, characterized throughout by what Adam Gopnik calls "theatricalized gloom.

Memories as indicators of the impact of museum visits - ScienceDirect

Events of the Day," where the galleries are all dark and poorly lit, museum-goers suddenly find themselves in that first brightly-lit room with yellow walls, plastered from floor to ceiling with jubilant images of the twin towers from s and s film posters and magazine covers. Given the museum's apparent commitment to an otherwise linear narrative, the experience of suddenly ending up "before" the "after" feels incongruous in its own right. But the fact that this break in the timeline coincides with a drastic aesthetic and affective shift - the entry into what might easily get mistaken for a circa September 10, gift shop - raises broader questions not just about the museum's peculiar temporal logic but about its ideological nature.


What might we make of the way in which the museum-goer's entry to the historical past is actualized through this homage to the towers as readily co-opted icons? In Battle for Ground Zero , Elizabeth Greenspan offers a detailed account about why the historical component accounting for the "Rise of al-Qaeda" constitutes such a relatively small portion of the overall exhibition: This happens in two ways, exemplified by each of the first two rooms in the exhibit. The towers in this vision work as a motif for a larger symbolic loss, not of a sense of American impenetrability but of a dreamy way of life we'd already lost or never had.

In the "the Bombing" room, the museum perpetuates a fantasy of preparedness and swift recovery that obscures the geopolitical links between the two attacks and imposes, instead, a contrived narrative in which the shock of unimaginable violence gets naturalized as part of a "national destiny" plot. Both rooms epitomize the museum's paradoxical temporal logic, denoted in a layout that attempts to both situate viewers in history as if they are experiencing it unfold and to position them in such a way as to offer a coherent sense of an epoch, encapsulated. Like the unobtrusive image of the perpetrators later in the exhibit, the placard identifying the name of the strange yellow room of souvenirs is minimized; just above floor level, obscured on the side of a column, hangs an easily overlooked sign that says, "Landmark and Icon.

The space is an homage to a pre-traumatic world, in which recurrent images of the twin towers line the walls, graphically inserted into the background of movie posters advertising Working Girl and New York Stories ; rendered in cartoon form for the New York City Marathon poster and covers of the New Yorker magazine from , , and ; captured in photographic panoramas for promotional materials - notably three prints for Image Works Communications from depicting the view from the top of the South Tower across a city whose reputation as the gateway to hell in Ghostbusters 2 had recently given way to the apparent prosperity of the late s.

Display cases feature rows of postcards and keepsakes, towers in miniature, towers as the backdrop of wedding pictures posted to the digital archives by the people who had taken them. In another stark contrast to the rest of the museum, this space has no audible recordings, no witness testimonies projected from otherwise ubiquitous speakers.

Large benches line two entire walls, inviting visitors to sit down comfortably for the first time since entering the Historical Exhibition. The room creates for viewers a graspable nostalgia that reveals the museum's fundamental and unconscious logic, its appeal to the time capsule, to history that can be contained.

The best example of this, which stands in the center of the room, is a glass box prominently displaying Yamasaki's architectural model of the Twin Towers. As described by the memorial museum's chief of staff, Allison Blais, "[Yamasaki's] last known large-scale World Trade Center Model now stands in the Museum as a memory of the past, evoking nostalgia for a landmark forever gone from the skyline.

But it also takes us back to a time before the Twin Towers existed, when models like these stood not as reminders of a tragic moment in our nation's history but as promises for a brighter, more hopeful future. The feeling of pride remains, the burning pile or the space of absence its new emblem.

The room and its various containers exemplify the kind of temporal "containment" prevalent throughout the museum, which attempts perhaps irreconcilably to act as both a storehouse and catalyst for memory. Fundamentally, the way in which the museum contains time, so to speak, accords with a fantasy of narrative closure that works against its desire for historical verisimilitude. 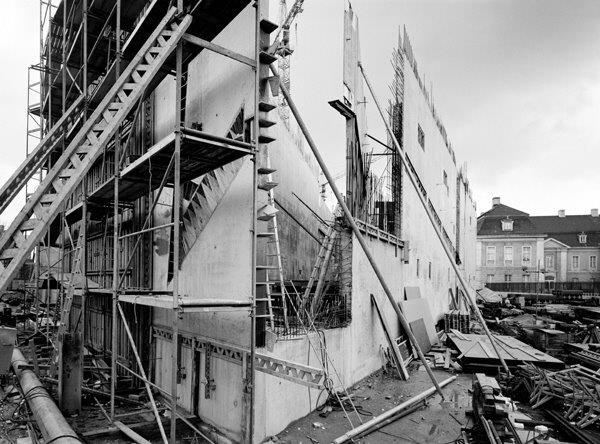 This paradox is most apparent in both the web and museum gallery version of "the Bombing" timeline.